It's a very simple speech.  Not eloquent in the Obama mode, but rather that of an ordinary man, who...once disappointed, won't ever make that mistake again.  In his own words,

An elegant speech from the heart.  You  don't hear those at political conventions...ever.  My hat is off to Mr. Eastwood, and I hope that Messers Romney and Ryan can, in the end, "retire" Mr. Obama from office ('retire' is the term Mr. Carter uses when describing the asswhoopin' he got in 1980).
Posted by Rich Vail at 17:33 0 comments

Bow To No One!

My president should bow to no one.

One Small Step For A Man...

Houston, Tranquility Base here, the Eagle has landed...


I met Neil Armstrong in 1968, when I was six years old.  He came to Hamilton Standard, where my father was working as lead designer on the space suits that he would wear to the moon.  He also was a lead designer of the life support backpack they wore...the three "first men on the moon" came to the factory picnic as a reward to the guys who worked there.  I was six...
Posted by Rich Vail at 09:00 0 comments

Mr.Obama We Built This Country, Not The Government!

Here's an excellent commentary on Obama's "You Didn't Build It."


129 As a small business owner all I can say is that I think the current sentiment in the small business community is that we didn't sign up for this shit. Y'all can vote for whatever the hell you want but we are not going to be a part of it.

I have seen more owners get out of the business or retire in the past couple of years than ever before and with the ACA on the horizon the jobs these businesses produced will not be replaced. The economics no longer work. This is why unemployment is always so high in socialist countries. What you have to go through to have employees is just brutal.
But here's the thing about what Obama said --- he has it exactly backwards. The government didn't build any of that shit he is talking about --- we built it. We are the ones who paid for it. Not only did we build our businesses we built the schools and the roads and everything else he thinks was generated out of thin air. If you want to get technical about it the businesses and taxpayers that came along before we did built it all and now we are building what comes next.

And not only that, but we did it with the albatross of a predatory, corrupt and overbearing government hanging around our necks at every juncture.
And now we have had enough.

I haven't made more than $50k from my business but one or two years of the past 15. But now that it is time to cash out after providing literally hundreds of jobs I get the stink eye and get castigated for being a member of the 1%. Even though I can remember sitting on the edge of the bed and holding my head in my hands wondering what I had done risking everything I had to create a business and wondering how it would all work out when I had just finished working several days in a row with no sleep... I am the enemy. Even though I didn't take a paycheck for the first year of the business and later skipped other paychecks to meet payroll or to pay taxes I am somehow at fault for the fact that all of these people sitting on their asses or working their cushy government jobs with the large pensions funded by armies of tax collectors and regulators may have to go without.

Well, I already went without so they can bloody well shut the fuck up and take their turn in the barrel! If they want to risk everything they have or work their asses off with no guarantee of success only to be told at the end that they were not responsible for their own success and don't deserve their rewards then they are welcome to go down that path and see what it is like. But the number of people who will pursue the American dream and build the economy from the roots up will be greatly decreased in the current atmosphere and all of these self-entitled idiots will sit around wondering why the government is still going broke and why no one is hiring.

No country can survive socialism. It just doesn't happen. Sooner or later the bill comes due. But before it does you always get demagogic idiots like Obama, or Chavez who try to blame their failures on the only people who are keeping everything afloat. It is not enough they sank the damn ship... they have to come after the people in the life boats too.

You can't make this shit up...


via Newsalert
Posted by Rich Vail at 18:58 0 comments

Democrats: "I Want It Now!" 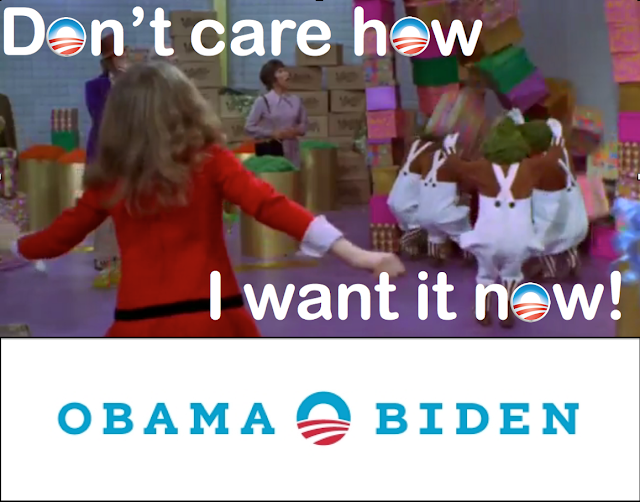 Via LegalInsurrection.com
Posted by Rich Vail at 18:36 0 comments

Here's the chart showing unemployment under the "stimulus" package... 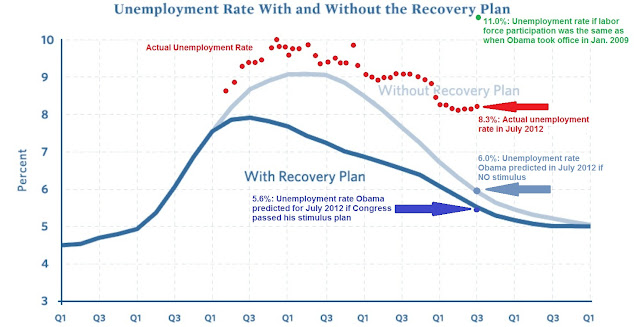 Here's is Kira Davis' elequent a response to Toure's "niggerization" comment as there has been.

The Obama That I Used To Know

Every once in a while, I read something that really strikes a cord.  This election isn't about Romney/Obama, it's about the direction the country is currently heading.  It's about whether or not Americans will have control of the direction their lives go, or whether the government will.

There is not a single Obama voter anywhere in the land who believes that another four years of him will make this country better. Not a single one from coast to coast. No, what they believe is that he will make the country a worse place for those people that they hate. That he will have four more years to sink their ideas deeper in the earth, regardless of how many families go hungry and how many fathers kill themselves because they can no longer take care of their families. What they believe is that Obama will grant their group more special privileges and the rest of the country can go to hell.


.
– Daniel Greenfield on “The Most Divisive Campaign in American History.”  Here's some more;

Obama can't win on the economy. He can't win on foreign policy. He can't win on any aspect of his administration. All he can do is stir up violence and then promise to heal the country in his second term while winking to all the representatives of the grievance groups. It's not a new game, but the Democratic Party has never played it quite this baldly in a national election. And if it succeeds, then national politics will have finally been reduced to the level of a Chicago election.

We were expected to believe that the typical Obama voter in 2008 was hoping for a better country, but in 2012 there is no more hope, only hate and fear. The typical Obama voter is not acting as an American, but as a representative of an entitled group looking to secure and expand those entitlements at the expense and the detriment of the country at large.

To vote for Obama after years of grotesque economic mismanagement that has no precedent in history, that exceeds the worst actions of Andrew Jackson or Ulysses S. Grant, is not the instinct of an American, but a selfish greedy looter scrambling to grab a few dinner rolls off the tray while the ship is going down. There is no policy justification for voting for a man with the worst economic and foreign policy record in the country's history. There is no American justification for voting for him. Only the UnAmerican motivation of carving up a dying country into group fiefdoms privileging identity politics over the common good.


And, that ladies and gentlemen is what this election is about.  Every so often, there comes a turning point in our history.  One at which We The People have a say in  what direction we want the country to go.  This election is our choice...to choose government control of our lives, or to be able to grab the reigns ourselves...we have 83 days left to choose wisely.

Over the next few months we can expect all of the MSM to palinize Paul Ryan as a horrible racist and mysoginist.  It's started yesterday and you can expect it to build into a crescendo over the next month.
Posted by Rich Vail at 18:30 0 comments


How do you tell a Romney voter from an Obama voter?
Romney supporters sign their checks on the front;

Obama supporters sign 'em on the back.
Posted by Rich Vail at 17:36 0 comments

Rich and I decided to watch movies this morning and we put in "Star Trek" by J.J. Abrams and Damon Lindelof and as the progressed we started to wonder if and when the squeal was coming to the big screen.  So, I of course went to the computer and started to do some research on any squeal. As I found; there is of course one and it is in post-production and with a story line including "Kahn".

I very much enjoyed the new version that J.J.Abrams and Damon Lindelof were taking the "new crew".  What I don't understand is why would you take a story line that has not just been done in the original series but then continued as a squeal with the "Star Trek: the Wrath of Kahn".

I was excited to hear that there would be another movie being made but to go back to the ideas of the shows and previous movies is showing a lack of creativity.

If they really wanted to take the show into a new direction; as they have already changed the past and created a new future than incorporating what they have changed and start a new and alternate future should be the course of the "New: Star Trek".

This would be a different spin on Spock's and Kirk's relationship as this would now make them step-brothers.
A "family dynamic" that would effect future story lines and their relationship.

The new movies should look to a new course and new story lines to keep it alive.

If Romney really wants to hammer Obama in ads, he should just replay most of Obama's 2008 campaign speeches.  The ads would just write themselves:


If you look at Obama's proposed budget, the deficit is three times the one the Democratically controlled Congress passed in 2008...and it's still rising... 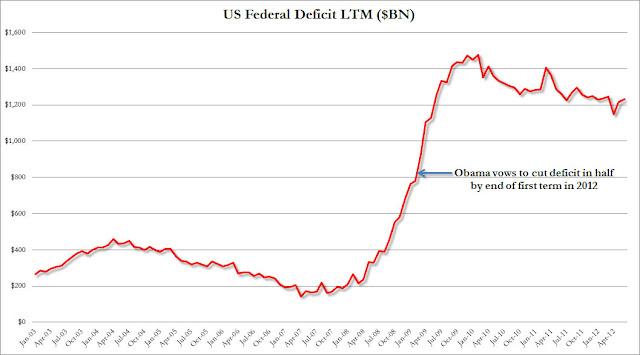 All of Obama's pledges have a time lapse on them...I guess this one does too: 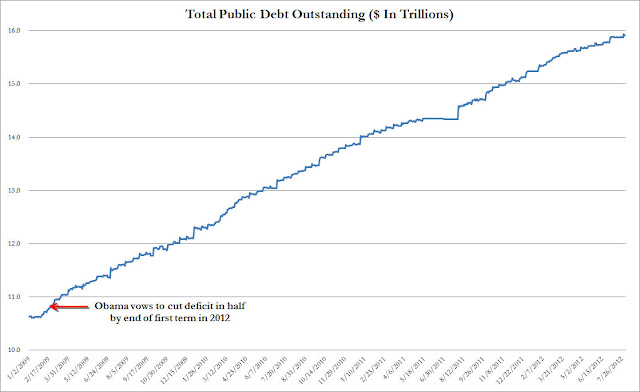 Mr. Obama has added  more to the public debt than all the rest of the presidents and Congresses combined.  That's frightening...and the fact that we have no end in sight is rather scary as well.  We are on the precipice of bankruptcy.

It's time for Congress to stop spending money we don't have.  The rest of the world won't continue to buy US bonds in perpetuity.  We can't continue to spend, spend, and spend some more.  The end is nigh.