Obama: I opposed the "individual mandate" before I supported it...


Criticizing Hillary Clinton for her support of the mandate, Obama said that “she believes we have to force people who don’t have health insurance to buy it.” At another debate, candidate Obama stressed the importance of understanding what it means to mandate health insurance: “A mandate means that in some fashion everybody will be forced to buy health insurance.” The government, in other words, would be asking people to buy something they otherwise would not buy.  The mandate does not merely regulate commerce—it requires it. In 2008, President Obama understood this distinction. In 2012, his administration is pretending the distinction does not exist.

Affirmative Action: Why Isn't The Media Covering This?

Why? Because it would shatter the little glass room that that MSM has built around Affirmative Action and that only white people can be racists...

"Lunatic in my evolution class asking the most absurd question and gets angry when the Prof (Dr. Kajiura) doesn't know how to answer it.

Context: The slide we were on just before was about Female Sexual Selection. For instance, female peacocks have selection in their mates, preferring the males with the bigger train of feathers.. Somehow she went off on some tangent with a question about how does Evolution play a role in the killing of all black people...

Dr. Kajiura tried to answer her question even though he had no idea what she was talking about. She repeated her question 4-5 more times and it turned into this craziness you see here... Clearly, this person has some SERIOUS emotional issues within herself and the discussion of PEACOCKS was the catalyst to the unleashing of this insanity.

She was escorted out of class and I heard she was tasered and arrested by the police. Today was our review day before a test on Thursday and students were getting irritated by her wasting our time. No one understood what her point was... Craziest thing I've ever seen.


I guess her hope and change just isn't working out as she'd planned.
Posted by Rich Vail at 08:25 0 comments 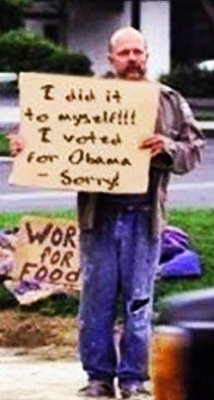 Via Don Surber's blog
Posted by Rich Vail at 06:36 0 comments

Here's the video of Ms. O'Brien

The Battle of Big Ideas

During the last few presidential campaigns, the chaos that the media seems to revel in has gotten out of hand this year.  With all the idiocy that's involved in this state or that state going 'first', perhaps it's time to invoke some sanity.

As a (somewhat) pundit, I, of course, have a few ideas on this.  Basically, it's tied to the tradition of the Iowa caucuses going "first," followed by the "first" primary in New Hampshire.  But after that, pretty much all the rest of the states vie for being the next first.

Instead of that, maybe it's time to rearrange things a bit...

but after that maybe we should build upon the idea of having regional primaries, where groups of states all vote somewhat together in a rolling series of "super tuesdays".

For instance, the "first" regional primary following New Hampshire would be New England.

That would be followed by the Mid-Atlantic states (New York, New Jersey, Pennsylvania, Delaware and Maryland).

You get the picture.  This would bring some sanity to what has become a mish-mash of idiotic process by which we select your president.

In 2008, John McCain predicted that if Barack Obama was elected president, Obama's energy policies would see $4 +  per gallon of gas...McCain was right...


Obama's energy policies are predicated on the proposition that expensive costs would make 'green' energy sources financially viable. That's the only way that solar-wind production system will break even. That's why the Obama administation has enforced a moritorium on energy production off the coasts of the Carolinas and in the Gulf of Mexico as well as shale oil in western states, much less Alaska.

In 1995, the Clinton administration denied further exploitation of Alaskan oil fields on the rationalization that it would take 10 years for those fields to produce oil...that was 17 years ago.  The current administration is content to deny the construction of the Keystone pipeline that would rapidly bring Canadian shale oil to refineries along the Gulf coast.  I suspect that's because a number of his larger donors (George Soros being one) own stock in the rail companies what are currently making huges sums of money in shipping that oil via the more expensive rail routes.