With Mr. Obama weighing in with his version of the dream act giving citizenship to the children of illegal immigrants brought to this country by their parents, and thus seizing moment from the stupidity of the GOP, he has attempted to influence the Hispanic vote in the upcoming election.

My take?  Before any sort of "Dream Act" can be discussed, we, as a nation must secure the porous Mexican border prior to any sort of discussion on illegal immigration.  It's that simple.  No ifs, ands or buts.  Close and secure the border, and only then talk about what to do with the 12-20 MILLION illegals currently here.

My view is that those individuals must return to their home countries and apply for a visa, just as everyone else who entered the country accourding to the laws passed by Congress and signed into law by past presidents.  Circumventing those laws to enter the country makes every damn one of them a felon in my view.  They broke the law of the land, that being set forth by Congress.  Ask any one who has taken 5 or more years to get a residence visa and see just how vehement they oppose amnesty for illegals.

This president has proposed his version of the "Dream Act" in order to pander to the Hispanic community here in America.  It's not about "fairness" it's about gaining political favour with a voting block that just might shore up his stumbling candidacy.
Posted by Rich Vail at 15:37 0 comments

Today in BuzzFeed.com, an article was posted about a painting by the artist John McNaughton.  The post points out numerous times, that "The Conservative Artist..." as if political views are important to the art in question. I guess what really annoyed me was this quote,


"The Provo, Utah based painter has struck artistic gold with his series, tapping into a widespread libertarian distrust of Washington, as well as a deep-seated hatred of President Obama, which critics says is animated by racial bias."

It wasn't all that long ago, the Democratic Party was telling everyone from hell to high water that opposing the policies of George W. Bush was patriotic.  When did dissent to a president's policies morph from patriotism to racism?  What changed?

Here's the painting in question. 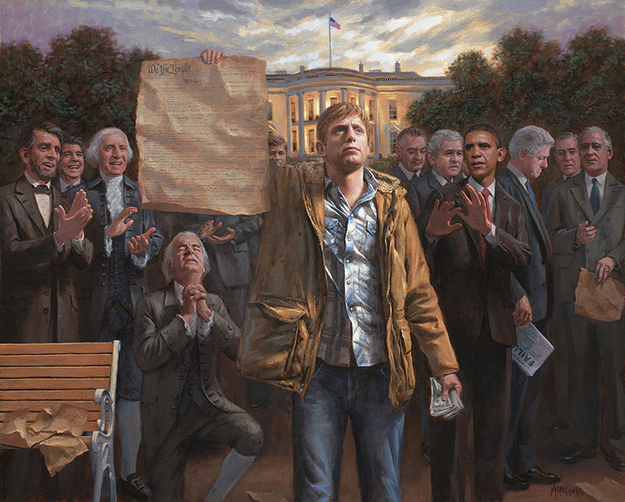 Personally, after all the pious crap that's been printed, posted, painted about The One, it's honestly refreshing to see a painting that mocks this man.
Posted by Rich Vail at 07:27 0 comments


UPDATE:  As someone who lives in the Baltimore-Washington Metroplex, you see every day the effects of the influx of government bureaucrats.  None of them actually contribute a damn thing to the economy...and infact sucking at Uncle Sam's hind tit as they do, they are draining money that could be better off spend by the people who pay taxes.

It's time to do across the board, 30% reductions in, not just spending, but firing 30% of the people who work for government...ALL branches of government.  Better yet, reduce the size of those working for Congress  by 50%...

Then, simplify the tax code to something along the lines of a flat income tax (20% for everyone above the poverty line).  It's not "fair" that someone who busts their ass and earns $1 million dollars a year, yet has to pay 50% of those earning to shore up a corrupt bureaucratic system that the country can't afford any more.

We won't see any of this happen until the government hits the bankruptcy skids, much like the Greek government is on the brink of.  No politician currently eating at the DC trough has the courage to do anything like the draconian measures that will be necessary to save our Republic...more's the pity.

via Newsalert
Posted by Rich Vail at 18:21 0 comments

Wish You Were Here, The Back Story

Ever wonder how that great album came about?  Here's a short video that tells the story...

via Newsalert.com
Posted by Rich Vail at 18:15 0 comments


“The Democratic Party has no new direction. … [Obama] has failed to advance the progressive cause,” Unger said. “He has spent trillions of dollars to rescue the moneyed interests and left workers and homeowners to their own devices.”


Keep in mind this guy is a far left liberal college professor unloading on his protoge...
Posted by Rich Vail at 19:50 0 comments

I found this on the Daily Caller article that describes the 2012 Obama campaign not having any new ideas...except blaming everything on Bush!  From the comments,


...and that's all Mr. Obama has been able to say for the past three and a half years. He still refuses to take responsibility for adding 70% to the national deficit...nor accept responsibility for the regulatory strangle hold his administration has placed upon American businesses.

Last week, a journalist was excoriated for simply asking a "hard" question  of the president...something 99% of the DC press corps has refused to do.  Eventually, Mr. Obama will have to face voters and aswer for what his administration has done.   I suspect that he'll use the Jimmy Carter precident of being "retired by the voters."...
Posted by Rich Vail at 19:41 0 comments

No Bailouts For The "Little People"

With all the bailouts and payoffs the current administration has given out...it's a wonder that the "little people" aren't getting pissed.  My wife found this picture yesterday...I think it's an excellent commentary on just how much Mr. Obama's agenda has screwed up the country. 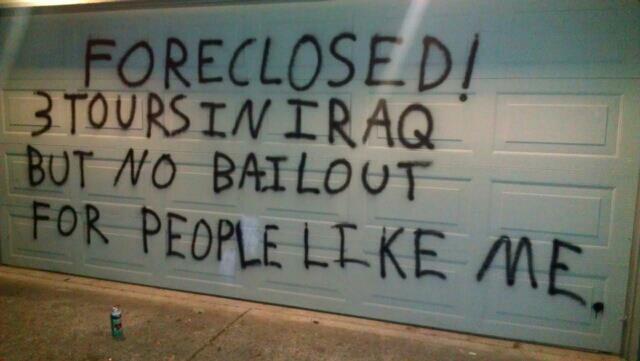 It seems Mr. Obama doesn't like anyone asking him questions.

A One Term Proposition

Obama said the private sector is "fine". I beg to differ. My wife hasn't been able to find a full-time job in more than 4 years...and this idiot says that the economy is "fine"? What an asshole. I have spent the past 4 years worried about how we're going to pay our bills.

I've also been worried that if Mitt Romney got the nomination of the GOP that he'd not be tough enough, or his campaign nimble enough to defeat the Politician in Chief who currently resides in the White House. I've been worried that we were facing a John McCain redux...but here's some evidence that my concerns may be misplaced. Here's the Romney campaigns answer to the "fine" comments of Obama...


It's quite possible that the Romney campaign has realized that the media will do anything they can to scuttle his candidacy...something McCain never learned...

UPDATE:  Not even Axelrod can answer a point blank question on this asinine comment:

I've been playing a game called World of Tanks. It's a Massively Multi-Player Online Game...and it's loads of fun. After all...you get to run tanks from the 1920's through the mid-1950's...and it's lots of fun blowing up stuff. But..here's one of the tanks in the game. It's an M5 Stuart light tank.

...and as  light tanks go, it's a decent tank.   If you're interested go to www.worldoftanks.com.  It's lots of fun and you'll meet people from all over the world.  In my clan we have men and women from US, Canada, UK, South Africa, Indonesia, Malaysia, Australia and New Zealand.  Give the game a look, and if you like it...give me a holler, my handle is Redwing6 and I lead "The Blues & Royals."

Firewall: Up or Down

When WIll Obama Be Held Accountable?

When will the JournoLists of the MSM finally hold Mr. Obama to the standard that he set at the beginning of this term? If not now, when?


By his own words, said three years ago, he's a failure and should be a one-term president. I hope in November, we can fulfill his request.

Law enforcement in this country is beginning to believe that they don't have to follow either the Constitution, or any other laws.  Recently in North Carolina, a black Dodge Charger was filmed driving erratically on the freeway, but according to news reports, The Secret Service owns the care and the was acting "...in an 'official' capacity"?  I call this bullshit.

The Secret Service has no authority on the roads.  Yet another example of too much police power at all levels of government.  Too many cops don't think that any laws are binding upon them.  "Law Enforcement" has run amuck with police all over the country arresting people for filming them.

Recently in Chicago, police arrested a journalist for filming them.  The cop was caught on camera saying, "your 1st Amendment rights can be suspended..."  Homeland Security needs to be abolished along with the DEA, ATF along with Federal Security Police.
Posted by Rich Vail at 11:38 0 comments