What we'll face once Iran has the bomb...which will happen within the next year.  Thanks for being firm Barry. 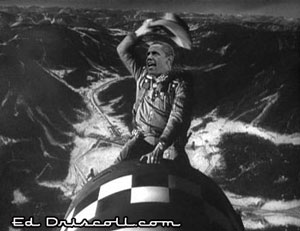 ﻿
But more tellingly, here is what candidate Obama had to say about missile defense (remember he sold out the Poles, Czechs and eastern European allies to Putin for "help" with preventing Iran gaining a nuclear weapon...which they haven't and won't deliver upon) while he was still campaigning.
Now that terrorist, or specifically Al Quieda aquiring a nuclear weapon is more and more likely, we have the NY Times teaching all about what to do in a nuclear blast.

The advice is based on recent scientific analyses showing that a nuclear attack is much more survivable if you immediately shield yourself from the lethal radiation that follows a blast, a simple tactic seen as saving hundreds of thousands of lives. Even staying in a car, the studies show, would reduce casualties by more than 50 percent; hunkering down in a basement would be better by far.

But a problem for the Obama administration is how to spread the word without seeming alarmist about a subject that few politicians care to consider, let alone discuss. So officials are proceeding gingerly in a campaign to educate the public.

“We have to get past the mental block that says it’s too terrible to think about,” W. Craig Fugate, administrator of the Federal Emergency Management Agency, said in an interview. “We have to be ready to deal with it” and help people learn how to “best protect themselves."

Officials say they are moving aggressively to conduct drills, prepare communication guides and raise awareness among emergency planners of how to educate the public.

An InstaPundit reader says this...but Glenn has a plethora of links as well...


Regarding your post on government recommendations for nuclear survival:


I am quite impressed to see anyone on the left actually studying and contemplating how best to handle a disaster and how best to release this valuable information.

It wasn’t too many years ago the newly formed Department of Homeland Security under then Secretary Ridge released a memo that stated how best to handle a disaster. That memo had numerous items listed included important things like keeping water and food supplies sufficient for at least 72 hours since that was the earliest you should expect help from the Federal Government.

Unfortunately that memo also included the, very accurate and potentially life saving I might add, information about keeping duct tape and plastic on hand (which online also referenced nuclear fallout I think)

It was pilloried by those on the left and it became the joke of the year. Everyone from Senator Reid to most liberal Congressmen and The Daily Show on down to Letterman and Leno ripped into this recommendation for days if not weeks. Oh they had some fun.

Unfortunately instead of helping to improve and support public safety and responsibility they chose to make political points.

A year and a half later Katrina hit. Hardly anyone in the primarily liberal districts hardest hit had ever heard the first 10 or so items on that list (if I recall it was 15 or so). They certainly didn’t have food or water stocks and how were they to know help would take at least 72 hours! If only the Government had let them know!!! Wait, they did but the left chose politics rather then reinforce the factual information in that memo. Lives could have been saved.

So to see Democrats putting public safety over scoring political points is quite a pleasant (if not a little tardy and a bit hypocritical) surprise.

As the blogfather is want to say...read the whole thing.
Posted by Rich Vail at 12:37