This is New York

This is what is in store for America...should we allow it. The photographs following were taken on Madison Avenue in New York City...not in the Middle east, or South Asia, but here in the heart of America. 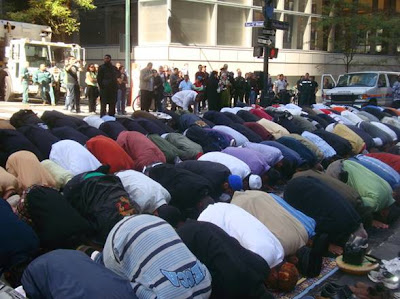 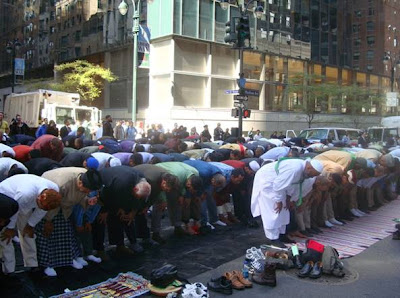 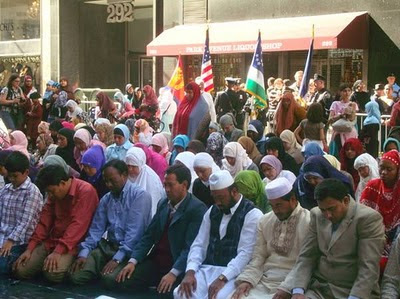 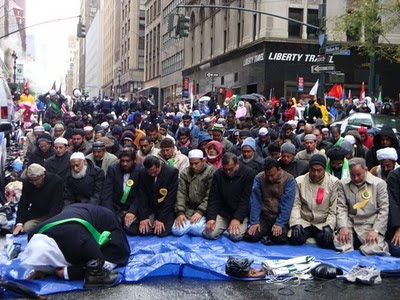 In many cities in Europe, the rule of law has been suspended as the police no longer enter muslim enclaves. Every summer in France, [muslim] "youth's" riot for the official enactment of Sharia Law...now, in New York City, a Saudi Arabian financed group wants to build a 15 story most within a block or two the where the World Trade Center Towers once stood. Buildings that were destroyed by Muslims.

The proposed name of this mosque is of great consequence, though few in the West and especially in America where European history is not as widely known: The Cordoba House. What is incendiary about this seemingly innocuous title? Cordoba was the capital of Al Andulus which is what the Berber/Arabs called the portion of the Iberian Peninsula, which is now known as the Kingdom of Spain. Muslims, have never recognized that the Kingdoms of Castile and Leon after the reconquest of Grenada, the last Muslim enclave on the Iberian Peninsula.

Thus, even in Muslim publications, this proposed name is understood for what it means. It means that the Saudi financiers mean to begin to speed the religious conquest of the Americas. They are staking a claim to "Ground Zero" in New York City as a religious site holy to those "martyrs" (we call them terrorists) who gave their lives to initiate this jihad against our country.


The project by Muslims to build a mosque in the United States, close to the place where the 9/11 attack took place, is causing quite a stir. It is worth noting that the name chosen for the mosque is confrontational and provocative. The first Cordoba mosque was built in that Spanish city in the aftermath of the Muslim conquest of Christian Spain. This Islamic “Conquista” was followed by the killings of men, and the enslavement of women, many of whom were carried away to the Arab lands to work as servants and concubines for their Muslim masters. For both Arabs and Muslims, the history of their conquests remains as a symbol of their past glory, and power. They have no thoughts of remorse or shame, when they recall those heinous crimes that accompanied the colonization of Spain!


Nowadays, some Muslims in America dream of repeating that ugly history of Islamic imperialism. In fact, I submit that the very choice of “Cordoba” as the name for the projected mosque was not an innocent one. On the contrary, it indicated a longing for the resumption of Islamic futuhat (conquests) throughout the world.

Actually, New York City has already several Sunni and Shi’ite mosques. It is a known fact that the Irhabi ideology has infiltrated many of the Sunni centers; while some Shi’ite mosques have allowed Iranian Intelligence services to operate freely within them.

We, as a people must not allow this mosque to be built.  Islam, has a long history of preempting historic and religious sites of other cultures as it's own by establishing either mosques on those site, or simply destroying them.  Look at the giant statues of Buddha in Bamyan that stood in Afghanistan for more than 15 centuries...only to be destroyed by the Taliban less than a decade ago despite world wide protests.  Following the conquest of Jerusalem, on the Temple Mount, in order to forstall Jewish claims, Caliph Umar, built the Al Aqsa Mosque, a site that still causes unrest in Isreal today.  In Constantinople, following it's conquest by the Turks in 1453, they converted the Cathedral of Haggia Sophia into a mosque.  In India, many religious sites such as,


Ram Janmabhoomi refers to a tract of land in the North Indian city of Ayodhya which is the birthplace of Lord Rama. Archeological Survey of India, after conducting excavations at the site reported that prior to 1528, a temple stood at this site but with the arrival of Mughals the temple was demolished and replaced with Babri Mosque.[11] many other temples were also demolished and replaced with mosques.


The 1986 edition of the Encyclopædia Britannica stated that "Rama’s birthplace is marked by a mosque, erected by the Moghul emperor Babar in 1528 on the site claimed of an earlier temple".[12]

These are merely the most famous examples of preemption by Muslims.  We must stop this now, before it's too late.  Either that, or prepare for dhimmitude...and be ready to pay a tax and face 2nd class citizenship for being a non-believer.  IT CAN HAPPEN HERE!
Posted by Rich Vail at 16:41