It' looks like the Obama Administration for the 2nd straight year has lowballed it's projections on the deficit.  In Feb, 2010, when it was trying to get it's budget for FY2011 through Congress, the Obama Administration provided figures that have proven to be as much as 10% lower than what is actually coming to pass.  Imagine that, the goverment projections of debt are proving to be much higher than anticipated. 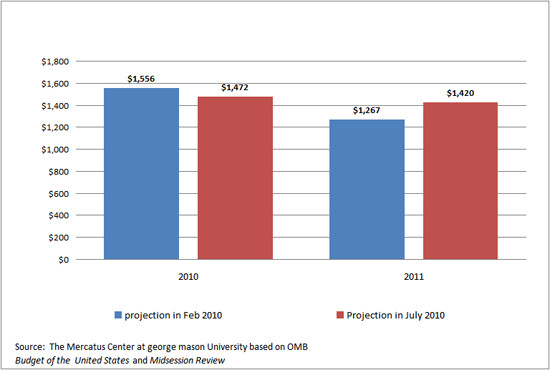 
It should come as no surprise that after five months of unchecked spending by the Democratic Congress, our fiscal situation is getting worse, not better,” said Senator Gregg. “Deficits in the coming years will be astronomical, for as far as economists are able to project. We knew the outlook was dire earlier in the year, but that didn’t stand in the way of the Democrat’s $2.5 trillion health care package or the $34 billion in new mandatory spending that the President has proposed since he put his budget out in February.

Furthermore, the Mid-Session Review applauds the Administration’s Statutory Pay-As-You-Go Act as a fiscal discipline tool enacted since the Budget was sent to Congress in February this year. What it fails to mention is that the Democrats have abandoned fiscal responsibility by excluding $69 billion of deficit spending from the official Pay-Go ledger.

What this portends is that the Obama Deficit Commission will present a case that since tax revenues are down, and there are no "viable recommendations to reduce spending" in order to pay for more government, we'll just have to raise taxes.  Just what we need in the midst of a deep recession...raise taxes and guarantee that there will be far more government intervention.

Additionally, this should come as no suprise since most of those in the "business of government" are far more interested in regulating and controlling the economy while the great mass of the people vastly prefer a free market economy.

So the chances of Congress, as it is presently constituted, actually reducing the size and scope of government are right up there with "slim and none."
Posted by Rich Vail at 20:34