In October 2008, Sarah Palin, in the VP debate said that the Obama jobs plan was a jobs killing plan...

We're no in our 43rd straight month of 8.0+ unemployment...and the current rate is 8.1% only because there are now far fewer people in the labour force than 1948.

Here's a graphic that shows what Mr. Obama claimed would happen is his $860,000,000,000.00 "stimulus [that wasn't] package" was passed by a Democratic Party controlled Congress: 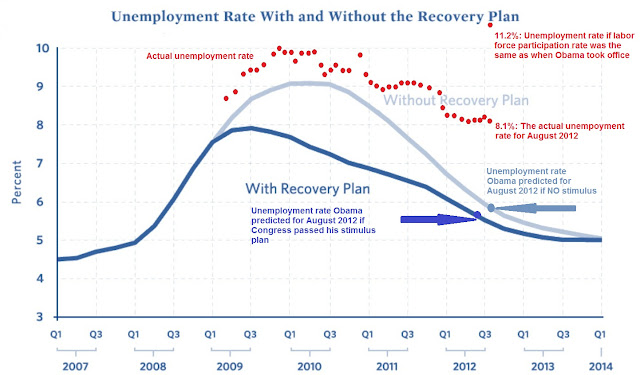 He has utterly failed to do what he promised and he wants another 4 years?  Here's some information from the August 2012 BLS unemployment report:

This man demands that we give him another 4 years to finish the transformation of America...into what? A perpetually high employment state, just like Europe?  The president works for us.  He has failed in his task...it's time for him to go.
Posted by Rich Vail at 14:53