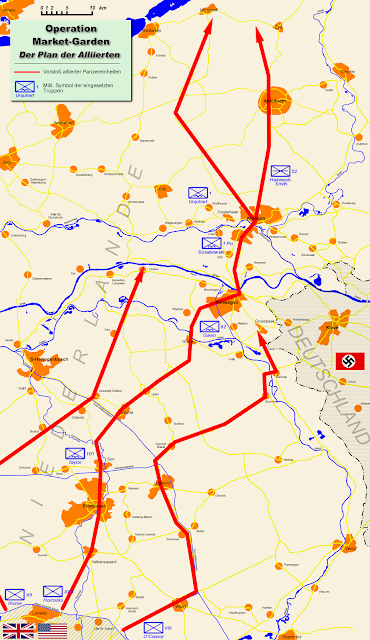 
Initially, the operation was marginally successful and several bridges between Eindhoven and Nijmegen were captured. However, Gen. Horrocks' XXX Corps ground force's advance was delayed by the demolition of a bridge over the Wilhelmina Canal, as well as an extremely overstretched supply line, at Son, delaying the capture of the main road bridge over the Meuse until 20 September. At Arnhem, the British 1st Airborne Division encountered far stronger resistance than anticipated. In the ensuing battle, only a small force managed to hold one end of the Arnhem road bridge and after the ground forces failed to relieve them, they were overrun on 21 September. The rest of the division, trapped in a small pocket west of the bridge, had to be evacuated on 25 September. The Allies had failed to cross the Rhine in sufficient force and the river remained a barrier to their advance until the offensives at Remagen, Oppenheim, Rees and Wesel in March 1945. The failure of Market Garden ended Allied expectations of finishing the war by Christmas 1944.[18]

The British 1st Airborne suffered nearly 80% casualties in killed, wounded and captured before crossing to the south side of the Maas (Lower Rhine) River...

My father was scheduled to fly as deputy commander of his troop carrier squadron, but ended up with an inner ear disorder and was grounded for several weeks prior and after the operation.  That's a good thing for me, because the pilot that took his place was shot down...and killed, but he  got his stick off before his plane went in.