During his speech inaugerating the Martin Luther King, Jr. monument (which was made in China by slave labour), he spent most of the speech pushing for "redistribution of wealth" and blaming his predecessor for the country's economic woes.


Barack Obama bashed Bush and pushed “change” and redistribution of wealth during his speech today at the Martin Luther King Jr. Memorial. What could have been a unifying moment turned into a campaign speech. Nice work, Barack.


Nearly 50 years after the March on Washington, our work, Dr. King’s work, is not yet complete. We gather here at a moment of great challenge and great change. In the first decade of this new century, we have been tested by war and by tragedy; by an economic crisis and its aftermath that has left millions out of work, and poverty on the rise, and millions more just struggling to get by. Indeed, even before this crisis struck, we had endured a decade of rising inequality and stagnant wages. In too many troubled neighborhoods across the country, the conditions of our poorest citizens appear little changed from what existed 50 years ago -– neighborhoods with underfunded schools and broken-down slums, inadequate health care, constant violence, neighborhoods in which too many young people grow up with little hope and few prospects for the future.

Our work is not done. And so on this day, in which we celebrate a man and a movement that did so much for this country, let us draw strength from those earlier struggles. First and foremost, let us remember that change has never been quick. Change has never been simple, or without controversy. Change depends on persistence. Change requires determination. It took a full decade before the moral guidance of Brown v. Board of Education was translated into the enforcement measures of the Civil Rights Act and the Voting Rights Act, but those 10 long years did not lead Dr. King to give up. He kept on pushing, he kept on speaking, he kept on marching until change finally came. (Applause.)

And then when, even after the Civil Rights Act and the Voting Rights Act passed, African Americans still found themselves trapped in pockets of poverty across the country, Dr. King didn’t say those laws were a failure; he didn’t say this is too hard; he didn’t say, let’s settle for what we got and go home. Instead he said, let’s take those victories and broaden our mission to achieve not just civil and political equality but also economic justice; let’s fight for a living wage and better schools and jobs for all who are willing to work. In other words, when met with hardship, when confronting disappointment, Dr. King refused to accept what he called the “isness” of today. He kept pushing towards the “oughtness” of tomorrow… {All emphasis is mine, Ed.}

Eventually, Mr. Obama will realize that this isn't what the country wants...that "Class War" just doesn't sell very well in America. Here's the new face of the [Social] Democratic Party. 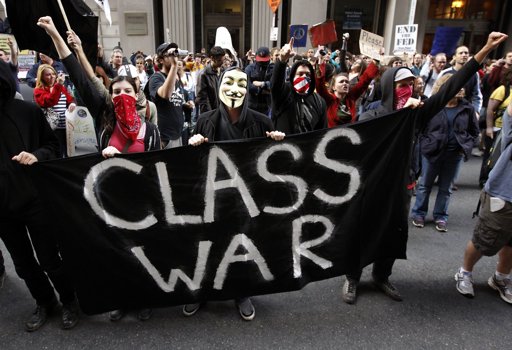 Liz Cheney said on FoxNews this morning that,


“In terms of President Obama, what he’s doing politically he may think makes sense. I think it’s actually scarier than that, though. I think he really believes it. I think that he’s not put forward so many policies that aren’t working economically and that are not working for him politically that you’ve got to at some point it must be ideology. It must be that he really believes in redistribution of the wealth. He really believes in increasing capital gains tax even if it means lower revenues to the treasury. It’s something new that we’ve seen from a president in a long time and I think it’s very concerning.”

When Mr. Obama was confronted by Joe the Plumber in 2008, he was merely saying what he really believes...that the only way to economic prosperity for this country is to take away from those who do the work, and give it to those who won't work.
Posted by Rich Vail at 18:41