Via the blogfather, here's a graph that shows how much of a failure the 1st "Stimulus Package" was... 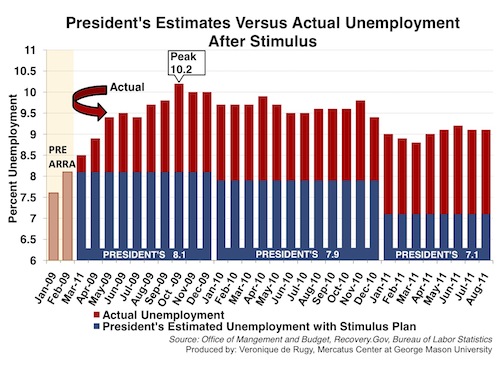 Now, Mr. Obama is proposing to borrow an additional $450 billion dollars to "stimulate" the economy again.  The general definition of insanity (or stupidity) is to repeat an action, all the while hoping for a different outcome...

The 1st "stimulus" (oops, Employment Act) failed dismally.  Mr. Obama's proposal is literally more of the same.  Giving money to state, county and municipalities in order to avoid their having to layoff more SEIU members...is very nearly a payoff.  Since, we all know now, "shovel ready" infrastructure projects only exist in the fevered minds of bureaucrats, just how does Mr. Obama propose that these projects be started immediately?

This proposed "stimulus" is merely a political ploy of this politician.  He means to use it as a method to beat the GOP candidates and Republican party in general "those mean people wouldn't give me what I wanted to save the country...they're 'unpatriotic'..."  You get the idea, or as James Pethokoukis points out.


“There’s been much speculation that President Barack Obama will spend $1 billion to get reelected. Turns out those guesses were off by $446 billion. What Americans heard last night was a $447 billion political plan, not an economic one. It’s purpose was to a) fire up the demoralized Democratic base and b) show independents that Obama is trying to do something – anything – to reduce unemployment.”

Mr. Obama is running scared and is out of ideas.  He has no clue what to do, and neither do any of the academics with whom he has filled his "economic team."
Posted by Rich Vail at 20:45