Recently, Donald Trump has begun to pointedly ask questions about Mr. Obama's birth certificate.  Prof. Jacobson of Legal Insurection believes that Mr. Trump is doing serious damage to Mr. Obama's cause.  I also believe that to be the case.

Last week, I received the following information from a good friend and retired journalist.  He rates his source as a 2.5 on a scale of 1 to 5.  here it is:

Barack Hussein Obama II
General Hospital, Mombasa, Kenya where Obama was born a few hours later at 7:21 pm on August 4, 1961(what a sad day for the USA!). Four days later his mother flew to Hawaii and registered his birth in Honolulu as a certificate of live birth which omitted the place and hospital of birth."

Here it is, folks! The document we have been waiting for! Now if only SOMEONE in Congress or the Supreme Court will act on this! Spread this around.....if these documents are as authentic as they certainly seem to be, Obama is NOT qualified to be our President and he sits in the White House illegally! This is what Obama has spent almost $2M (so far) to hide. Here's a close-up of the top of the document where you can plainly read his name and his parents' names, etc.... 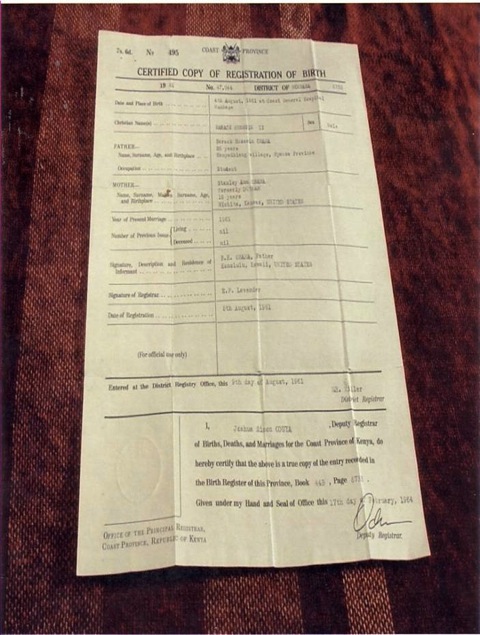 A British history buff was asked if he could find out who the colonial registrar was for Mombasa in 1961. After only a few minutes of research, he called back and said "Sir Edward F. Lavender. Note the same name near the bottom of the photo above. Source(s): Kenya Dominion Record 4667 Australian library." And here's a close-up of the bottom of the document where you can read "Coast Province of Kenya" and the official signature of the Deputy Registrar..... The above document is a "Certified Copy of Registration of Birth", but below is a copy of the actual Certificate of Birth.the real-deal legal kind of certificate. The Mombasa Registrar of Births has testified that Obama's birth certificate from Coast Province General Hospital in Mombasa is genuine. This copy was obtained by Lucas Smith through the help of a Kenyan Colonel who recently got it directly from the Coast General Hospital in Mombasa , Kenya . Here it is. 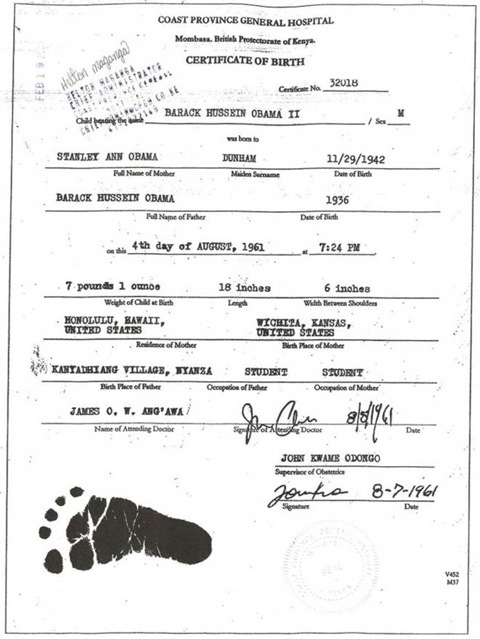 Note the footprint!! The local Muslim Imam in Mombasa named Barack with his Muslim middle name Hussein so his official name on this certificate is Barack Hussein Obama II. The grandmother of Barack Hussein Obama, Jr. reveals the story of his birth in Mombasa, Kenya, a seaport, after his mother suffered labor pains while swimming at ocean beach in Mombasa. 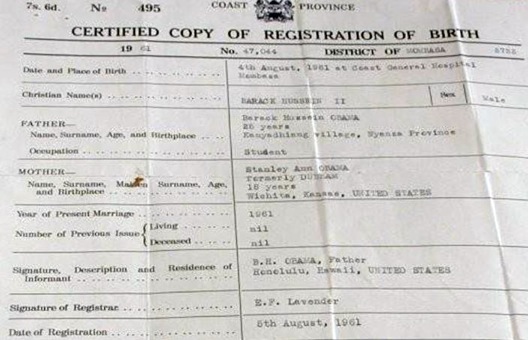 "On August 4, 1961 Obama's mother, father and grandmother were attending a Muslim festival in Mombasa, Kenya . Mother had been refused entry to airplanes due to her nine month pregnancy. It was a hot August day at the festival so the Obamas went to the beach to cool off. While swimming in the ocean his mother experienced labor pains so was rushed to the Coast Provincial General Hospital, Mombasa, Kenya where Obama was born a few hours later at 7:21 pm on August 4, 1961(what a sad day for the USA!). Four days later his mother flew to Hawaii and registered his birth in Honolulu as a certificate of live birth which omitted the place and hospital of birth."

Letter from Kitau in Mombasa , Kenya

"I happen to be Kenyan. I was born 1 month before Obama at Mombasa medical center. I am a teacher here at the MM Shaw Primary School in Kenya . I compared my birth certificate to the one that has been put out by Taitz and mine is exactly the same. I even have the same registrar and format. The type is identical. I am by nature a skeptical person. I teach science here and challenge most things that cannot be proven. So I went to an official registrar today and pulled up the picture on the web. They magnified it and determined it to be authentic. There is even a plaque with Registrar Lavender's name on it as he was a Brit and was in charge of the Registrar office from 1959 until January of 1964. The reason the date on the certificate says republic of Kenya is that we were a republic when the "copy" of the original was ordered. I stress the word "copy". My copy also has republic of Kenya. So what you say is true about Kenya not being a republic at the time of Obama's birth, however it was a republic when the copy was ordered. The birth certificate is genuine. I assure you it will be authenticated by a forensic auditor. We are very proud Obama was born here. We have a shrine for him and there are many people who remember his birth here as he had a white mother. They are being interviewed now by one of your media outlets.

Fortunately they even have pictures of his parents with him immediately after his birth at the Mombasa hospital with the hospital in the back ground. It will be a proud day for us when it is proven that he was born here and a Kenyan became the most powerful man in the world. I encourage anyone to come here and visit. I will be happy to take you and show you the pictures at the hospital myself as well as my document and many others that are identical to what Taitz posted. God Bless. Kitau"

So, how much more proof do we need? 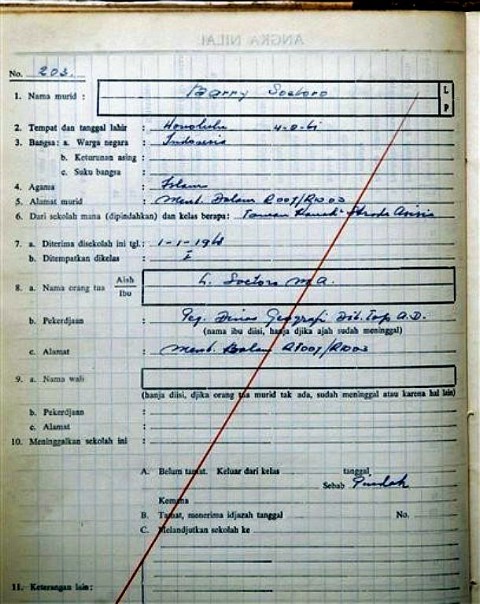 This registration document, made available on Jan. 24, 2007, by the Fransiskus Assisi school inJakarta, Indonesia , shows the registration of Barack Obama under the name Barry Soetoro made by his step-father, Lolo Soetoro. 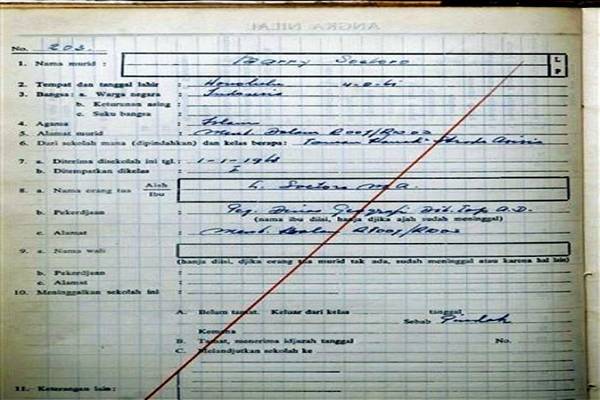 How did this little INDONESIAN Muslim child - Barry Soetoro, (A.K.A. Barack Obama) get around the issue of nationality to become President of the United States of America ?

In a move certain to fuel the debate over Obama's qualifications for the presidency, the group "Americans for Freedom of Information" has released copies of President Obama's college transcripts from Occidental College ..The transcript indicates that Obama, under the name Barry Soetoro, received financial aid as a foreign student from Indonesia while an undergraduate at the school. The transcript was released by Occidental College in compliance with a court order in a suit brought by the group in the Superior Court of California. The transcript shows that Obama (Soetoro) applied for financial aid and was awarded a fellowship for foreign students from the Fulbright Foundation Scholarship program.

To qualify for this scholarship, a student must claim foreign citizenship. This document provides the smoking gun that many of Obama's detractors have been seeking - that he is NOT a natural-born citizen of the United States - necessary to be President of these United States. Along with the evidence that he was first born in Kenya , here we see that there is no record of him ever applying for US citizenship..

Gary Kreep of the United States Justice Foundation has released the results of their investigation of Obama's campaign spending. This study estimates that Obama has spent upwards of $950,000 in campaign funds in the past year with eleven law firms in 12 states for legal resources to block disclosure of any of his personal records.

Mr. Kreep indicated that the investigation is still on-going but that the final report will be provided to the U.S. attorney general, Eric Holder. Mr. Holder has refused comment on this matter. LET OTHER FOLKS KNOW THIS NEWS - THE MEDIA WON'T!

I'm told that this is the information that Mr. Trump's investigators have unearthed...whethere that's true or not, you tell me. With my meager means, I haven't been able to confirm or deny whethere these are the real documents.  But, I have been able to discover a surprising number of people are doing some very serious investigative work.  Additionally, there's a great deal of money, several million of dollars, at least.  I don't know if this will result in anything other than a footnote in history (google Chester A. Arther...for example) but it is beginning to gain traction with independent voters.  Mr. Obama's ignoring this will only increase the questions being raise, not supress them.  Until some solid answers are provided, one way or another, it will continue the slow burn.

UPDATE:  Obama releases a scanned copy of his "Certificate of Live Birth," but not the long form birth certificate that, for example, the US State Department requires to get a passport. 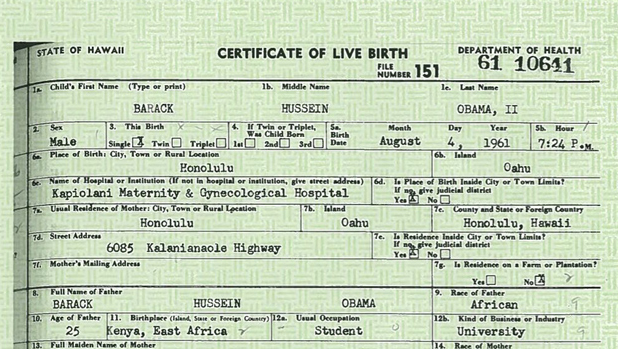 Why has he waited so long on this?  Big Journalism has a pretty good list of reasons.


#1. The President’s strategy of silence on the birth certificate controversy has been a public relations disaster. A growing number of Americans continue to be distrustful of him, leading to a continued downward spiral of his approval ratings in the polls.

#2. The birth certificate controversy is one small part of a web of unanswered questions about President Obama, his background, his extreme political associations, and his campaign donations.

#3. The “birther” issue has proved useful to President Obama as he struggles to control his progressive base. As for the media, they have benefited from the tabloid appeal of the “birther” storyline, misusing the issue as an opportunity to portray conservatives as “racists” and “whackjobs.”

#4. Hopefully, the document is legit.

#5. The media frenzy surrounding Trump and the “birther” issue has distracted attention from other possible GOP presidential contenders. Will it ultimately help or hurt the GOP’s chances to retake the White House in 2012?

I think that he's using this issue for pretty much all of these reasons.  By painting his opponents as whack jobs, it makes it easier to play nasty...read the whole thing.

UPDATE 2nd:  There is credible evidence that the document has been altered.  Follow this link to the evidence. That evidence is compelling, because photoshopping shows up if you know how to look for it.


"Yes - but another feature is a glaring mistake - as he is listed as African and back then he would have been listed as a Negro or Malado. African was not a common word used back then. "