Between Barack & A Hard Place... 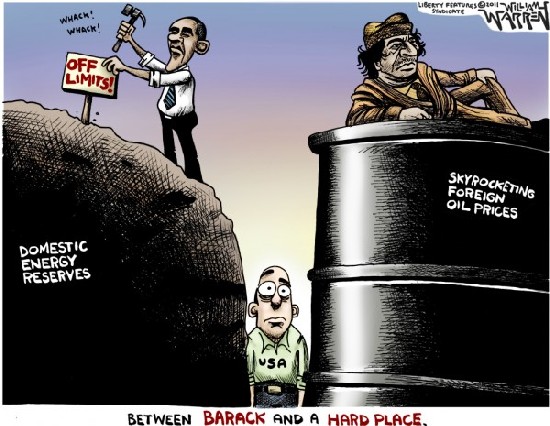 Since the Obama administration has refused nearly all new drilling, we'll likely see gas prices top $5 per gallon by the end of summer.  This will...kill off any economic recovery that's occured.  Furthermore, it will set off a round of inflation as business increase prices to cover the costs of transporting goods and providing services that will further erode the ability of lower paid workers to make ends meet.  But then, Obama administration officials are record  as saying that they want to see $9 per gallon gasoline.  Links here and here.


“Somehow we have to figure out how to boost the price of gasoline to the levels in Europe,” Steven Chu, the director of the Lawrence Berkeley National Laboratory, told the Wall Street Journal in September.

While Ken Salazar cancelled 77 drilling leases immediately after being sworn in as Secretary of the Interior.  This administration in general, and the Democratic party in particular seem bend on destroying the economy of this country.  The crippling debt load that has been inflicted over the past 4 years by the Obama, Pelosi, Reid trioka will take decades to payoff...if ever, when combined with vastly increased energy costs, will add ever more to the burden working Americans are saddled with.