Are You Better Off Now Than You Were 4 Years Ago?

I'm not.  My wife can't find a full time job since she was laid off two and a half years ago.  I only just started back working in a cabinet shop three weeks ago.  We're perpetually behind on all of our bills and the worry of being evicted is always there. 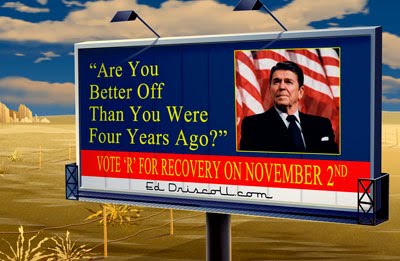 In 2006, the Democratic Party took control of Congress and did nothing to the economy except to make it worse.  Of course big government Republicans who controlled the GOP at the time were, and are still, merely "Democrat Lite."   But, Nancy Pelosi and Harry Reid systematically set out to create the economic chaos that we have  now by refusing to do anything about Freddie Mac and Fannie May.

﻿Democrats fought every Republican effort to clean up the impending Fannie-Freddie catastrophe with their standard class-warfare rhetoric and racist sliming. The Democrats had a field day fighting off Republican attempts to reform Fannie-Freddie before it brought the mortgage business to full-blown crisis. Then, when the whole thing exploded in all our faces — bringing the cascading collapse to banks and every other industry in America — the Democrats turned right around in the blink of an eye and wagged their dirty little fingers at Republicans as though none of the citizenry would be the wiser. The Democrats weren’t worried. They presumed that once they got control of the Congress, they could bury their own malfeasance and incompetence under the rug of majority rule. And that is precisely what they have done. No investigations. No hearings. Democrat rulers think the public is still in the dark ages — before the internet.

In the four years since the Democratic Party has been in control of Congress, they have systematically waged economic warfare against business by implementing ruinous regulations.  Furthermore,

They have used their majority status to ram through mountains of anti-business, regulatory legalese that literally shackles the recovery they disingenuously proclaim. Even as Democrats have run around the country all summer like a bunch of chickens with their heads cut off, yelling “Recovery!” at the top of their little lungs, the recovery isn’t happening on Main Street and they are the very reason why it isn’t. They won election with their crass gospel of envy, bashing the job creators at every turn and then shake their heads with wonder at why these same small businesses have the life too scared out of them to hire people.
These Democrats openly admit they haven’t even read the bills they’ve passed and then ponder why the citizenry is upset with them. They act as though the U.S. Constitution is nothing more than a doormat that they can step upon as they enter the halls of taxpayer-funded, personal enrichment. They’ve turned the words “public servant” into a synonym for lying thief.[ed see Charlie Rangel & Maxine Waters]
Ever since wresting control of Congress, the Democrat rulers have done all in their power to finagle their way to bureaucratic tyranny, all the while blaming the out-of-power Republicans for having the temerity to say “No,” as strongly as their puny numbers will allow them.

It's time for a change and change we need.  Vote every single incumbent out of office.  Vote in fiscally conservative candidates who won't spend money the government doesn't have and will begin to roll back both the size of the federal and state bureaucracies as well as the scope of government intervention in business.  Candidates who will end ALL government bailouts of the private sector.  Any business "too big to fail" is too big to suceed, and must be permitted to collapse else we will enter a perpetuall cycle of shoring them up...with our great grand childrens money.
Posted by Rich Vail at 03:54