Here are some in-flight Photos of the F-22's as the first aircraft delivery was taking place to Langley AFB in Va. Langley has been chosen to be the first operational AFB for the first wing of F-22's. The first two pictures are above Hampton Roads and Langley, Virginia. 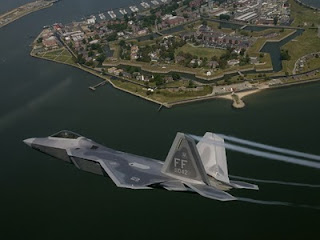 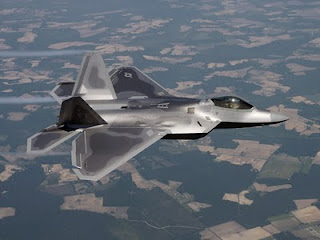 The Aircraft flying along with the F-22 in these photos is an F-15, which will eventually be replaced by the F-22 which is a much more capable aircraft overall. 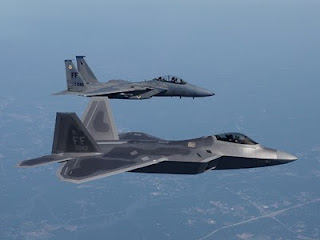 In wargames against the F-15, two F-22s were able to operate without being detected while they went head to head against eight F-15s. The F-22s scored kills against all the F-15's while avoiding dection by either the F-15s or Ground Based Radar.. Maj. Gen. Rick Lewis said:


'The Raptor Operated Against All Adversaries with Virtual Impunity; Ground Based Systems Couldn't engage and NO Adversary Aircraft survived'!

They're the first military aircraft ever built that is equipped with a 'black-out button'. What that means is this:  The best conditioned fighter pilots are capable of maintaining consciousness up to in the vicinity of 15+ G. The Raptor is capable of making 22+ G turns.

If someday an adversary builds a missile that is capable of catching up to one of these airplanes and a Raptor pilot sees that a strike is imminent, he hits the 'b.o.b.' and the airplane makes a virtual U-turn, leaving the missile to pass right on by.  They know that in the process he will temporarily lose consciousness, so the Raptor then automatically comes back to straight and level flight until he Wakes back up.

The JU-87 from WWII had a comparable BOB. Once the pilot release his main bomb, the plane would pull up sharply and then fly straight and level until the pilot could recover from the g-forces of the pull up. Once again, everything old is new again.

Also, I think you'll find that about 10 g's is the limit that people can withstand http://en.wikipedia.org/wiki/High-G_training
not the 15 stated here.