Give Tiger A Break 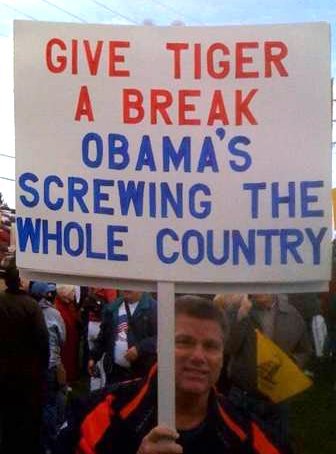 The problem is should we give Mr. Obama a break?  After all the policies that he is enacting...are being done literally because the far left of the Democratic party has desired them for 100 years.  I don't think that the country can afford Obama Care, especially after the numbers that Congress used to show that it is "budget neutral" are a fraud.   Via the AP

A report by economic experts at the Health and Human Services Department said the health care remake will achieve Obama's aim of expanding health insurance — adding 34 million Americans to the coverage rolls.

But the analysis also found that the law falls short of the president's twin goal of controlling runaway costs, raising projected spending by about 1 percent over 10 years. That increase could get bigger, however, since the report also warned that Medicare cuts in the law may be unrealistic and unsustainable, forcing lawmakers to roll them back.

That was via Legal Insurection.  William Jacobson's take is,


The CBO numbers were rigged, because the CBO was forced to follow unrealistic assumptions in its forecasts.
We said it, the American people understood it, but the Democrats forced the bill through anyway. They must pay the price in November.

Now it makes sense. The Democrats refused to delay the vote on Obamacare even though the Medicare Actuary was not able to complete his analysis and cost estimates in time for the vote. In light of this report, it is clear why the Democrats didn't want to wait. They could game the CBO, but not the Medicaire Actuary.

That goes a long way to explain WHY the Democratic Leadership wanted this legislation passed quickly.

UPDATE:  From Pete Suderman, of Reason Magazine, we have this report:


Just look at the New York Times. Since the law's passage, the Grey Lady has reported that New York state's efforts to regulate insurance companies drove premiums through the roof and destroyed the market—and an individual mandate, which the state lacked, is a theoretical fix at best. The paper of record also reported that the law may not actually bring down costs for the sick, that the law was hastily and confusingly written (enough that it may deprive Congressional representatives and their staffs of health care coverage), that it may not help all the tough-luck cases it was supposed to resolve, and that health insurers may soon be turned into de facto public utilities.


The details vary somewhat, but cumulative picture is one that's broadly in line with what critics have been arguing since the first legislative drafts became available (at least). Rather than offer true reform for our country's health care system, ObamaCare takes a dysfunctional mess and makes it even more dysfunctional, and at greater cost.

Even Kathrine Sibelius has admitted that the Obama Administration has no  clue as to just how much this fiasco will cost the people of this country.