The political narrative of the MSM on ObamaCare has begun firming up already.  If this hugely unpopular bill does pass today, then the MSM will begin to hammer home that the Tea Party was utterly ineffective.  On the other hand, this picture seems to sum up the Tea Party's narrative: 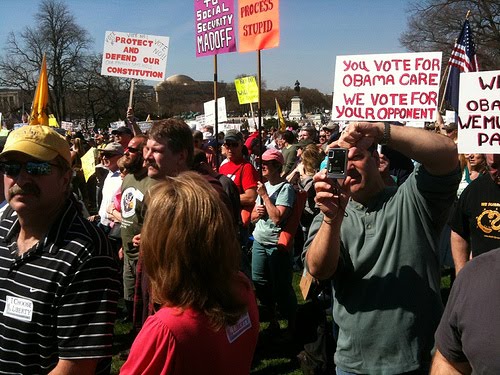 And that is what many of these people have to say.  I don't think that over the next 8 months, if this bill passes these people will go quietly home and just take what this Congress has rammed down our throats.  I believe that not only will they continue to be politically active, but that even more will begin to turn out and actively work against those politicians who voted for this bill.

It's my belief that we'll see record numbers of Democrats turned out of office this November.  Instead of the projected 40 seat loss, I think that we'll see more than 100 seats lost by the Democrats in the House and I think that 10-15 will turn over in the Senate.  We're going to see, not a wave of losses but a tsunami of losses turning against them.
Posted by Rich Vail at 09:31