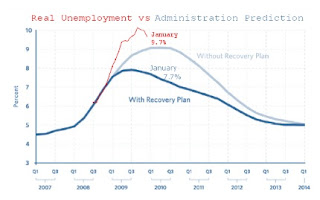 Last year...at the urging of Mr. Obama, Congress rushed through a huge, pork laden "stimulus package", claiming that in order to keep unemployment below 8%, this bill must be pushed through immediately.  Now, one year later, the official unemployment rate has risen far above the target Mr. Obama claimed wouldn't be passed if the "stimulus bill" was implemented.  As Democratic pollster, Charlie Cook said, "Democrats piled all this cotton candy and pork and junk and pet projects into it, so it discredited the stimulus package in the minds of a lot of voters..."  The "stimulus package" has failed.  Now the Obama Administration wants to pass "stimulus pt 2"...only this time they're going to call it a "jobs bill."
The thing is, the "jobs bill" has little or nothing to do with jobs and is merely a much smaller repeat of last years monsterous bill.  Yet, this government is still wasting time trying to ram through a health care bill that a very large majority of voters just don't want.  In 1992, James Carville said, "It's the economy stupid."   This administration still hasn't learned.  From the NYTimes,

Labor experts say the economy needs 100,000 new jobs a month just to absorb entrants to the labor force. With more than 15 million people officially jobless, even a vigorous recovery is likely to leave an enormous number out of work for years.

If the Democratic Party continues along the path this administration has charted, then this November, the loss of 40 seats in the House will be a drop in the bucket.  Charlie Cook, of The Cook Report, a respected Democratic Pollser has this to say,


Well when a Democratic Senate candidates loses Barney Frank's district and loses Massachusetts, I think it raises a legitimate question of what is safe -- not what's in danger, but what is safe.

But if you were going to build a profile of where is it going to be absolutely the worst for Democrats, I would say the Deep South, Old South, the border south, states and districts with large small-town and rural populations, maybe lower percentages of college graduates -- in other words, sort of yuppie types. I would say fewer transplants from the north. Places where Obama did worse than John Kerry did in the general election.

And there's sort of like a Nike swoosh, eastern Ohio, West Virginia, western Pennsylvania, down and across Tennessee, across the south and all the way to Oklahoma that Obama -- I mean, 70 percent of the counties in America, Barack Obama did much better than John Kerry, but there is a sort of a swoosh of counties where Obama underperformed John Kerry -- and let's face it, John Kerry wasn't exactly a son of the South -- so that was like particularly bad.

The thing that I think a lot of Democratic strategists are really concerned about is that some of these districts are going to be gone for a generation or more. I mean, they're not coming back. They're ones that had somehow managed to hang on in Democratic hands even after the Democratic Party fell out of favor in a lot of the South. But once they slip away, I'm not sure they're coming back.

But, still Mr. Obama, Mr. Reid and Mrs. Pelosi are plowing ahead...this November is going to be much, much worse than anyone is now predicting...especially if the government seizure of health care is rammed through the Senate via a budgetary reconcilliation bill.

Now, Mr. Obama is pulling back from his promise not to raise taxes on the middle class...that is the one campaign promise that he repeated at every single stop during the 2008 presidential campaign.  Voters aren't in the mood for the vastly higher spending this Congress and this president have initiated...just think how pissed they're going to be when Congress drasticly raises their taxes to pay for all the spending.
Posted by Rich Vail at 16:09