The Real Cost of ObamaCare

Here's a graph showing the real cost of ObamaCare. It's really a Congressional shell game. Congress claims that the government seizure of the health care industry will only coast $1.2 trillion dollars over it's 1st 10 years. That's a lie. Because the first 4 years, costs will be minimal, while the taxation will be huge. On the other hand, once the plan is actually implemented, in it's first 10 years of usage, it will cost $2.5 TRILLION DOLLARS, that's more than double it's "projected" first 10 year costs. This is, again, because it won't be fully implemented in the first 4 years of the "10 year plan". Thus, the Democratic leadership in Congress is lying to America in order to make their plan for ObamaCare merely SEEM to be saving money. 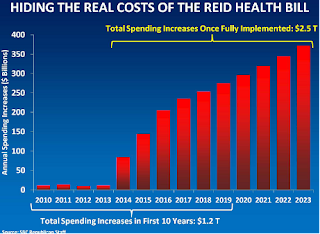 It goes without saying the if Congress was actually going to be covered by the plan they are foisting off on the rest of us, the pill they are shoving down our throats wouldn't be nearly so bitter.
Posted by Rich Vail at 09:33

That chart was created by Rep Paul D. Ryan, Republican, in an effort to discredit Obamacare's fiscal strengths - the Senate bill was scored by CBO to cost $857 billion, with a funding plan, and would reduce deficit over 10 years by $138 billion.

Paul D Ryan, the GOP's born again fiscal conservative who expects us to trust his critique and cost analysis of Obamacare...is the same Paul D Ryan who voted "YES" for the GOP UNFUNDED 2003 Medicare Rx Modernization Act (MMA - a fiscal trainwreck that has cost $1.2 trillion to-date and added $7 trillion (20%)to that $38 trillion unfunded liability Ryan calls our "broken promises" to our children's future in a WSJ attack on Obamacare....

Before Cato, a 2004 Duke Law & Technology Report made a prophetic statement: "the price tag on the MMA will have far-reaching economic effects that will likely force legislators to make fundamental changes to the tax system in the future and may ultimately cause the healthcare system in the United States to falter.” Boy, has it ever...forcing RX drug prices up to 2x what the rest of the world pays & preventing Medicare from negotiating lower prices for seniors & taxpayers, while giving the drug & insurance companies a $200+ billion windfall profit (at taxpayer expense!)

So, Paul Ryan, YOU have ZERO credibility when it comes to critiquing Obamacare's the cost of FUNDED health reform legislation - because your own record shows that you simply cannot be trusted.

Plus I'll take the word of 24 leading US economists, including 3 Nobel laureates, over fiscally irresponsible & 100% self-interested Rep Paul Ryan & the GOP propaganda machine. Their letter to Democratic leader Harry Reid, urged "expeditious enactment of your health reform", i.e. Obamacare. Here's their letter and their names are below.
http://delong.typepad.com/sdj/2009/12/health-care-dear-senator-reid.html