Mr. Obama, Where Are The Stimulus Jobs You Promised

From Biggovernment.com and quoted in it's entirety, a statement by Rep. Joe Wilson (R-SC)
Americans are hurting – there is no doubt. Unemployment is at a record high and since Speaker Pelosi has been in the Speaker’s chair, 8.7 million more people are unemployed. What’s even more frightening is that 3 million of those jobs have been lost just since the misnamed stimulus was shoved through Congress less than a year ago. So where are the jobs? 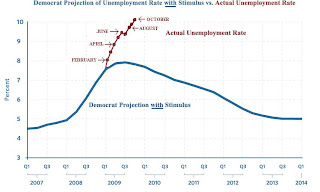 Earlier this week, we learned that Recovery.gov, the official Administration website charged with reporting abuse was its own worst offender. It is full of fake stimulus jobs in fake Congressional districts. It also shows that $3 million couldn’t even produce a single job in South Carolina’s fake 43rd district. Somehow, $1.8 million was spent for 1.4 jobs in the fake 00 district. This would be funny, but the money belongs to taxpayers, not the government.

Wednesday night, ABC News broke the news that the Government Accountability Office says that one out of every 10 jobs claimed to have been “saved or created” by the Administration came from projects where no stimulus funds had been spent. When asked about the inaccuracies, the spokesman for Recovery.gov replied, “Who knows, man, who really knows. There are 130,000 reports out there.”

After a week of reports on blatant inconsistencies in stimulus spending, and a hearing in the House Committee on Oversight and Government, this Administration still has not provided adequate answers as to the whereabouts of stimulus funds. In response to this Administration’s insufficient communication on stimulus spending, I called for an examination of all stimulus dollars appropriated.

You see, the Recovery Act includes a provision that allows for the establishment of a Recovery Independent Advisory Panel (RIAP). This panel consists of five presidentially appointed members to advise the Recovery Accountability and Transparency Board on how it could prevent fraud, waste, and abuse relating to covered funds. The President has yet to appoint this panel despite widespread stimulus inaccuracies.

On Thursday, I publicly called on the President to appoint this panel immediately. The Recovery Act is one of the largest spending bills in our nation’s history and it’s critical that we work together to maintain our goals of transparency and accountability. If this panel is not appointed by December 1, 2009, I will call for an outside, independent examination of spending and reporting inaccuracies.

These actions will address short-term reporting problems. But we really should have our eyes on the horizon. In the long term, we must continue to push this Administration and Speaker Pelosi to give this economy the economic jolt it needs.

Our plans like the Economic Recovery and Middle-Class Relief Act of 2009 (H.R. 407) unleashes the potential of American businesses, investors, and entrepreneurs. We help stabilize home values and help more responsible families achieve the American dream of owning a home. Instead of continuing to skyrocket federal spending, our plan offers incentive-based relief to individuals and job creators. It reduces the burden that the government places on both employers and employees and provides assistance to the unemployed.

I urge my colleagues on both sides of the aisle to come together to demand immediate accountability for stimulus spending inaccuracies and in the long-term, work together on bipartisan job creation plans to get America rolling again.
Posted by Rich Vail at 09:39